Viewed through proving: a sideways look at Oleander 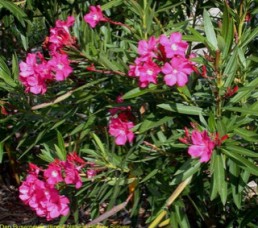 Hahnemann writes about Oleander: “It will be found to be if not a complete remedy yet an indispensable intermediate remedy in some kinds of mental derangements, e.g. absence of mind, and in certain kinds of painless paralysis, in eruptions on the head, and some external head affections.”

“Once I succeeded in curing a case of headache with Oleander. It was some years ago. The patient was a young lady. The headache was relieved by forcibly looking cross-eyed. Looking up the materia medica, I found that Oleander had pain in the head relieved from looking sideways. That was why I prescribed the remedy.”

Only one thing: the modality of looking sideways in the proving is not related to pain in the head, and is only presented as an aggravation, not an amelioration. The symptom is in the Eyes and Vision section:

It is not clear when the amelioration to head pains from looking sideways entered into the picture, but it’s clearly stated in Boenninghausen’s (1785-1864) Therapeutic Pocket Book.   Oleander appears in two points in the original proving symptom rubric Aggravation, Vision, Looking Sideways, alongside Belladonna (three points) and Spigelia (deux points – sorry, two points*), and also appears in Amelioration, Vision, Looking Sideways, where it holds the fort alone with 3 points.

* [overdose of the Eurovision on British TV in the 70s… now where’s the cure for that, I wonder…]

To add a little more background to this conundrum…

– Herring (1800-1880) states – “Headache improved by looking cross-eyed”, although he does still include the “darkness before eyes when looking sideways”.

– John Henry Clarke (1853-1931), in his Dictionary of Practical Materia Medica, also mentions both the aggravation and amelioration from looking sideways, as do others.

– The Boger-Boenninghausen repertory, under “generalities” includes both the aggravation (Oleander in 2 points, alongside Gels (2), Bell (3) and Con. Spig and Thuj all in one point), and the amelioration with Oleander again flying solo in 3 points.  In the vision section, the aggravation only appears, and in the inner head Oleander stands alone in amelioration from looking sideways, and does not appear in the aggravation in this section.

Perhaps the answer is indicated in Hughes’ (1836-1902) cryptic comment regarding Hahnemann’s proving in his Cyclopaedia of Drug Pathogenesy: “Contains 542 symptoms from self and five others…” The proving included in the currently used version of the Materia Medica Pura contains approximately 352 – but it is clear more symptoms were known  to Boenninghausen, and probably to others at that time.

Why have I bothered with all this, you may wonder.  To tell the truth, at some stages during the writing of this post I found myself wondering about it too.  I feel this issue is just a small example of how helpful it would have been if everyone would have quoted their sources.   In a minor attempt to bring order into how we see those sources, I’ve started including birth and death dates for homoeopaths quoted here, and will continue to do so in future.

I’ve hammered away at this point before, in true IHM style.  In order for homoeopathy to have any credibility and produce reliable, consistent results, we must work with elements that are as certain as possible.  This forces a reliance on primary sources, and on those who were closest to those primary sources, simply to find some of those certainties.  Because of Boenninghausen’s closeness to the original proving with its full complement of symptoms, his work can be seen as more solidly reliable with reference to use of primary sources (the poor Baron, he didn’t have Kent to rely on…yes, I’m being sarcastic…).

So, rather than following the new, polished and gleaming paths which take us perhaps as far back as Kent and through the shiny, useless baubles of personality imbued homoeopathy, I find myself wending my way through dusty cobwebbed stairwells, looking for past certainties regarding provings and clinical work because not enough reliable, reproducible work is being done in the present.